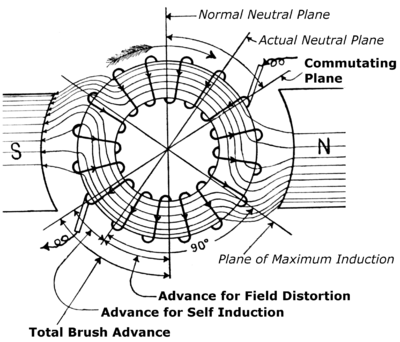 It is seen that, the e.m.f. induced in the conductors is always sinusoidal and commutator converts this sinusoidal e.m.f. to unidirectional e.m.f. Let us see, how it happens. 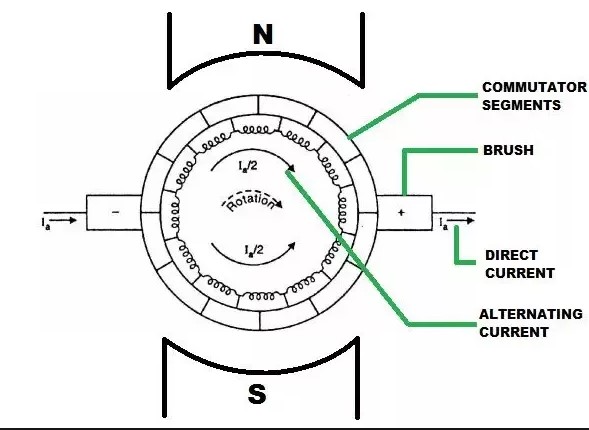 Such a ring is called split ring. The brushes P and Q are stationary and pressed on the surface of split ring. Split ring is mounted on the shaft and rotates as armature rotates.

Consider a single turn generator with conductors (1) and (2). These armature conductors are connected to the two segments of split ring. The external resistance R is connected across brushes P and Q. Under instant 1, the current flowing through resistance R is flowing from left to right as shown in the Fig. 2. This is by assuming the direction of current through conductor (1) downwards which is under N pole and through conductor (2) upwards which is under S pole, at the instant considered. At this instant brush P behaves as positive and Brush Q as negative.

But brushes P and Q are stationary and tapping the current from the commutator segments which are in contact with them.

The Fig. 4 shows the waveforms of current in the individual conductor and current in external resistance R. Effectively one brush always taps those conductors. carrying a current which is in 180oopposite direction to the conductors under brush one. So one brush remains always positive and other always negative, and the load current is unidirectional.

Note : In the limiting case, number of segments of a commutator is equal to number of armature coils in a practical generator. Due to this, commutating action is very fast and almost straight line i.e. pure d.c. can be obtained across the load.

In a practical d.c. generator, the small poles in addition to the main poles, fixed to the yoke in between the main poles are used to improve the commutation. These poles are called interpoles.