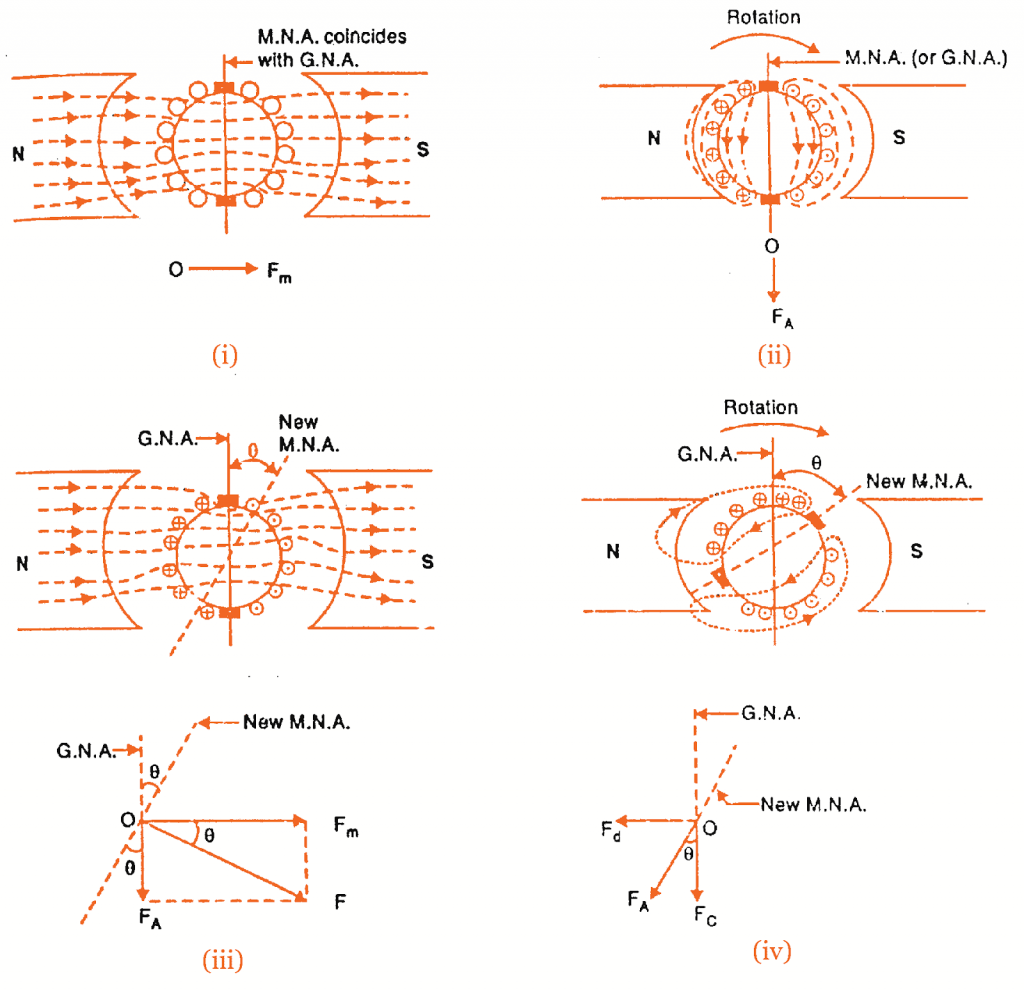 To understand the concept of armature reaction, consider a two pole d.c.generator. For simplicity we will assume that the brushes are touching the armature conductors directly, although, they commutator segments in actual practice.

Assuming that the generator is not driving and load. So that there is no current in the armature conductors. The distribution of main field flux under this case is as shown in the Fig. 1. The flux is distributed symmetrically with respect to axis called polar axis which is line joining the centres of N and S poles. The direction of flux produced by field coil is from left to right through an armature core and lines of force through the core are parallel to field axis.

The axis along which there is no e.m.f. induced in the armature conductors is called Magnetic Neutral Axis (MNA). From the Fig. 1 it can be seen that magnetic neutral axis (MNA) and Geometric Neutral Axis (GNA) coincides with each other. The geometric neutral axis is nothing but the axis of symmetry between the poles.

The brushes are always kept along MNA.

Note : Thus MNA can also be called ‘axis of commutation’ since reversal pf current takes place along this axis.

As shown in the Fig. 1, vector OFf represents the m.m.f. producing the main flux both in magnitudes as well as in the direction. MNA is perpendicular to vector OFf.

The vector OFA shown in the Fig. 2. represents the armature m.m.f. both in magnitude and direction. This m.m.f. depends on the magnitude of the armature current.

Uptil we have considered the main m.m.f. and armature m.m.f. separately as if they are existing independently.

Note : In practice the two m.m.f.s exist simultaneously in the generator under load conditions.
Now the flux through the armature is not uniform and symmetrical. The flux gets distorted. Due to interaction of two fluxes, the resultant flux distribution is changed as shown in the Fig. 3.

The resultant m.m.f. OFR can be found by vectorially combining OFf and OFA.

The new position of MNA is also shown which is perpendicular to the resultant m.m.f. vector OFR. The MNA gets shifted through an angle ф so that brushes are also shifted and are along new MNA.
Due to this brush shift, the armature conductors as well as armature current is redistributed. Some of the armature conductors which were earlier under the influence of S pole now come under N pole and vice versa.

This regrouping of armature conductors and armature current is as shown in the Fig. 4. It can also be seen that the brush shifts in the same direction as that of direction of rotation of armature.

It can be observed that both the components viz. demagnetizing and cross magnetizing, will increase with increase in armature current.