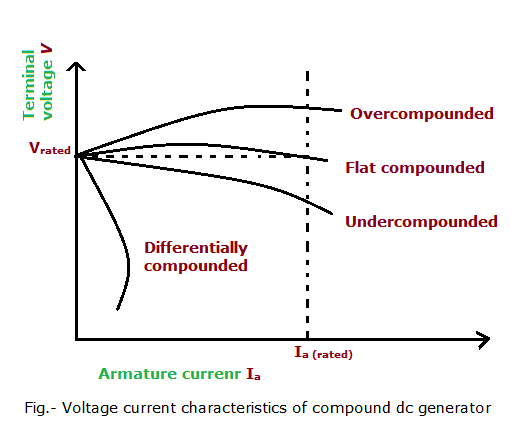 If drop in Vt due to armature reaction and other drops is much less than increase in Vt due to increase in flux then generator is called over compound and its characteristics is rising in nature, as shown in the Fig. 1. If the effects of the two are such that on full load current Vt is same as no load induced e.m.f. i.e. the effects are neutralizing each other on full then then generator is called flat compounded or level compound. Its characteristics is shown in the Fig. 1.

In differentially compound, ?T = ?sh ~ ?se.. The net flux is difference between the two. As IL increases, ?sh  is almost constant but ?se increases rapidly. Hence the resultant flux ?T reduces. There is drop due to armature resistance, series field resistance, armature reaction due to which terminal voltage drops further. Thus we get the characteristics of such differentially compound generator as shown in the Fig. 1.