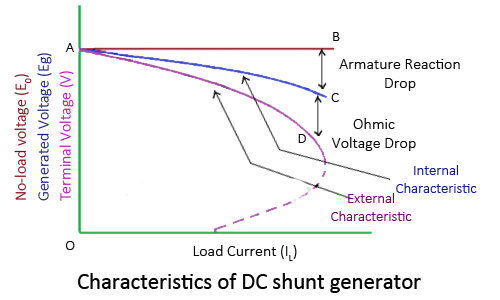 Due to the armature reaction, main flux pattern gets distorted. Hence lesser flux gets linked with the armature conductors. This reduces the induced e.m.f.

Note : Thus the armature conductors. This reduces the induced e.m.f.

For d.c. shunt generator we know that, E = Vt + Ia Ra neglecting other drops. So as load current increases IL, Ia increases. Thus the drop Ia Ra increases and terminal voltage Vt  = E – Ia Ra decreases. But the value of armature resistance is very small, the drop in terminal voltage as IL changes from no load to full load is very small. This is shown in the Fig. 3. Hence d.c. shunt generator is called constant voltage generator.

Why shunt generator load characteristics turns back when overloaded?

Consider the external characteristics of d.c. shunt generator as shown in the Fig. 3(a). From to point P, the load resistance decreases hence load current increases and due to Ia Ra and armature reaction, the voltage decreases by small amount. Hence characteristics is drooping in nature.

But if the load resistance is reduced beyond point P i.e. load IL is increased beyond P then it increases momentarilly. This is very large current and generator gets overloaded. Due to such a large current the armature reaction is severe and drop Ia Ra is also large due to which the voltage Vtdrastically reduces. This causes the current to decreases from P to Q, rather than increasing. Thus on the curve pqr, the voltage goes on reducing rapidly and at point r becomes zero. Thus beyond point p, if the generator is loaded, the load characteristics turns back till the generator gets short circuited and the curve meets x axis at point r where voltage is zero. At this point, small E is present due to residual magnetism.