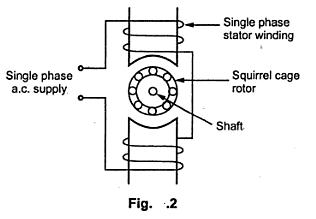 The stator has laminated construction, made up of stampings. The stampings are slotted on its periphery to carry the winding called stator winding or main winding. This is excited by a single phase a.c. supply. The laminated construction keeps iron losses to minimum. The stampings are made up of material like silicon steel which minimises the hysteresis loss. The stator winding is wound for certain definite number of poles means when excited by single phase a.c. supply, stator produces the magnetic field which creates the effect of certain definite number of poles. The number of poles for which stator winding is wound, decides the synchronous speed of the motor. The synchronous speed is denoted as Ns and it has a fixed relation with supply frequency f and number of poles P. The relation is given by

The rotor construction is of squirrel cage type. In this type, rotor consists of uninsulated copper or aluminium bars, placed in the slots. The bars are permanently  shorted at both the ends with the help of conducting rings called end rings. The entire structure looks like cage hence called squirrel cage rotor. The construction and symbol is shown in the Fig..1

The schematic representation of two pole single phase induction motor is shown in the Fig.2.