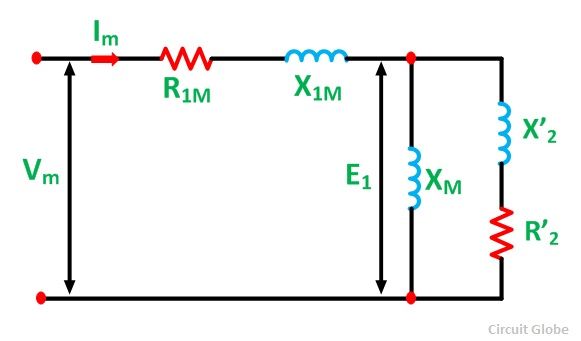 The double revolving field theory can be effectively used to obtain the equivalent circuit of a single phase induction motor. The method consists of determining the values of both the fields clockwise and anticlockwise at any given slip. When the two fields are known, the torque produced by each can be obtained. The difference between these two torques is the net torque acting on the rotor.

To develop the equivalent circuit, let us assume initially that the core loss is absent.

Hence the impedance of each rotor is r2 + j x2   where

If the core loss is to be considered then it is necessary to connect a resistance in parallel with, in an exciting branch of each rotor is half the value of actual core loss resistance. Thus the equivalent circuit with core loss can be shown as in the Fig. 2.

All other expressions remains same as stated earlier in case of equivalent circuit without core loss.