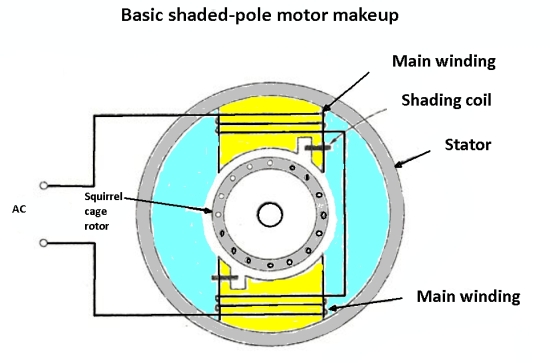 This type of motor consists of a squirrel cage rotor and stator consisting of salient poles i.e. projected poles. The poles are shaded i.e. each pole carries a copper band on one of its unequally divided part called shading ban Fig.1(a) shows 4 pole shaded pole construction while Fig. 1(b) shows a single pole consisting of copper shading band.

Key point : When single phase a.c. supply is given to the stator winding, due to shading provided to the poles, a rotating magnetic field is generated.

The production of rotating magnetic field can be explained as below :

The current carried by the stator winding is alternating and produces alternating flux. The waveform of the flux is shown in the Fig. 2(a). The distribution of this flux in the pole area is greatly influenced by the role of copper shading band. Consider the three instants say t1, t2 and  t3 during first half cycle of the flux as shown, in the Fig 2(a).

At instant t = t1, rate of rise of current and hence the flux is very high. Due to the transformer action, large e.m.f. gets induced in the copper shading band. This circulates current through shading band as it is short circuited, producing its own flux. According to lenz’s law, the direction of this current is so as to oppose the cause i.e. rise in current. Hence shading ring flux is opposing to the main flux. Hence there is crowding of flux in nonshaded part while weakening of flux in shaded part. Overall magnetic axis shifts in nonshaded part as shown in the Fig. 2(b).

At instant t = t2, rate of rise of current and hence the rate of change of flux is almost zero as flux almost reaches to its maximum value. So d?/dt = 0. Hence there is very little induced e.m.f. in the shading ring. Hence the shading ring flux is also negligible, hardly affecting the distribution of the main flux. Hence the main flux distribution is uniform and magnetic axis lies at the centre of the pole face as shown in the Fig. 2(c).

At the instant t = t3, the current and the flux is decreasing. The rate of decrease is high which again induces a very large e.m.f. in the shading ring. This circulates current through the ring which produces its own flux. Now direction of the flux produced by the shaded ring current is so as to oppose the cause which is decrease in flux. So it oppose the decrease in flux means its direction is same as that of main flux, strengthening it. So there is crowding of flux in the shaded part as compared to nonshaded part. Due to this the magnetic axis shifts to the middle of the shaded part of the pole. This is shown in the Fig. 2(d).

This sequence keeps on repeating for negative half cycle too. Consequently this produces an effect of rotating magnetic field, the direction of which is from nonshaded part of the pole to the shaded part of the pole. Due to this, motor produces the starting torque is low which is about 40 to 50% of the full load torque for this type of motor. The torque speed characteristics is shown in the Fig. 3.

Due to absence of centrifugal switch the construction is simple and robust but this type of motor has a lot of lamination as :