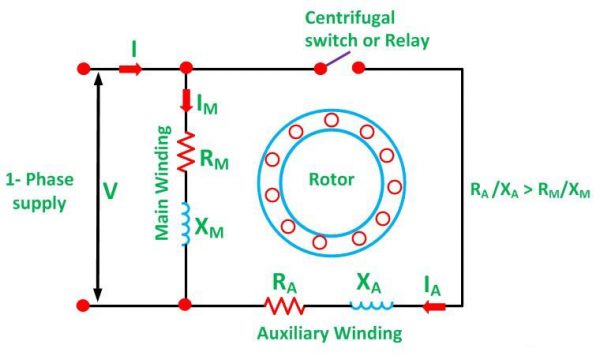 As main winding is inductive, current Im lags voltage by V by a large angle ?m while Ist is almost in phase in V as auxiliary winding is highly resistive. Thus three exists a phase difference of ? between the two currents and hence between the two fluxes produced by the two currents. This is shown in the Fig.1(c). The resultant of these two fluxes is a rotating magnetic field. Due to this, the starting torque, which acts only in one direction is produced.

The torque-speed characteristics of split phase motors is shown in the Fig.2.

These motors have low starting current and moderate starting torque. These are used for easily started loads like fans, blowers, grinders, centrifugal pumps, washing machines, oil burners, office equipments etc. These are available in the range of 1/120 to 1/2 kW.