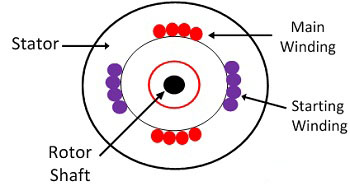 In the single phase induction motor, single phase a.c. supply is given to the stator winding. The stator winding carries an alternating current which produces the flux which is also alternating in nature. This flux is called main flux. This flux links with the rotor conductors and due to transformer action e.m.f. gets induced in the rotor. The induced e.m.f. drives current through the rotor as rotor circuit is closed circuit. This rotor current produces another flux called rotor flux required for the motoring action. Thus second flux is produced according to induction principle due to induced e.m.f. hence the motor is called induction motor. As against this in d.c. motor a separate supply is required to armature to produce armature flux. This is an important difference between d.c. motor and an induction motor.

Let us see why single phase induction motors are not self starting with the help of  a theory called double revolving field theory.