Thus torque in case of series motor is proportional to the square of the armature current. This relation is parabolic in nature as shown in the Fig. 1.

As the entire Ia  passes through the series field, there is a property of an electromagnet called saturation, may occur. Saturation means though the current through the winding increases, the flux produced remains constant. Hence after saturation the characteristics take the place of straight line as flux becomes constant, as shown. The difference between Ta  and Tsh is loss torque Tf which is also shown in the Fig. 2.

At start as Ta    αIa2   , these types of motors can produce high torque for small amount of armature current hence the series motors are suitable for the applications which demand high starting torque.

The speed-torque characteristics of a series motor is shown in the Fig. 3. 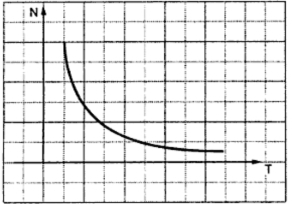