Now if shaft torque is plotted against armature current, it is known that shaft torque is less than the armature torque and the difference between the two is loss torque Tf  as shown. On no load Tsh = 0 but armature torque is present which is just enough to overcome stray losses shown as Ta0. The current required is Ia0 on no load to produce Ta0 and hence Tsh graph has an intercept of Ia0 on the current axis.
To generate high starting torque, this type of motor requires a large value of armature current at start. This may damage the motor hence d.c. shunt motors can develop moderate starting torque and hence suitable for such applications where starting torque requirement is moderate. 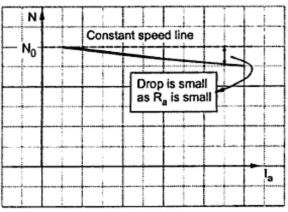 So the characteristics is slightly droping as shown in the Fig. 2.

But for all practical purposes these type of motors are considered to be a constant speed motors. 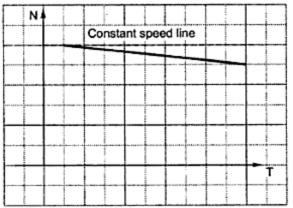