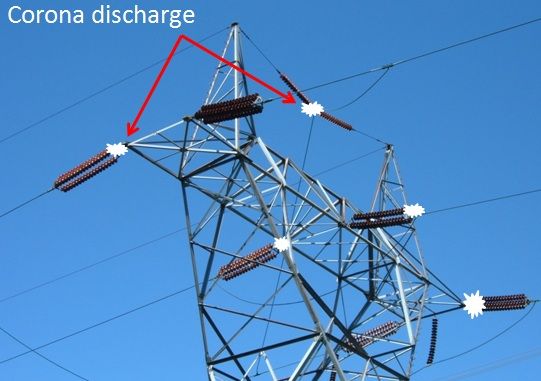 Do you know what is corona effect?

First consider a conductor system to which voltage is applied. If the potential applied is raised, gradually, beyond a limit, a pale voilet glow will appear. This will be accompanied by a hissing noise indicating the ionization of surrounding air of the conductor surface with characterstic smell of ozone. This phenomenon is known as corona.

Simply we can say, phenomenon of violet glow, hissing noise and production of ozone gas in an overhead transmission line is known as corona effect.

High electric field at conductor surface provides enough energy to the molecules of surrounding air that causes breakdown of air.

In case of a.c. Transmission ionized particles get attracted and repelled to conductor once during each half cycle. So, charge exists near the conductor surface. But in case of d.c. Transmission, negative and positive charges move respectively to the conductor of opposite polarity. So movement of charges between conductors is dependent on electric field distribution between them. But in case of a.c. It depends on potential gradient.

PHENOMENON OF CORONA – for an over head transmission system atomospheric air behaves practically like a perfect insulator when potential difference between conductors is small. If we increase the voltage, there is a corresponding increase in the electric field intensity.

This breakdown accompanied by following phenomenon.

2. A faint pale yellow glow appears which is visible in the dark.

If all these phenomenon occurs then we say corona produced in a transmission.