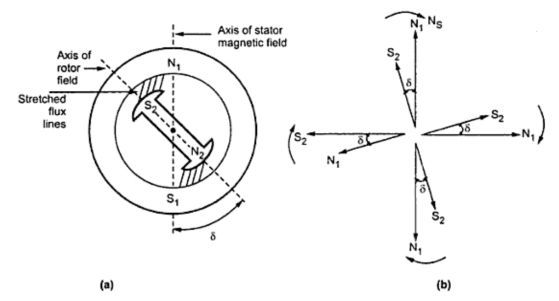 When a d.c. motor or an induction motor is loaded, the speed of the motors drops. This is because the load torque demand increases then the torque produced by the motor. Hence motor draws more current to produce more torque to satisfy the load but its speed reduces. In case of synchronous motor speed always remains constant equal to the synchronous speed, irrespective of load condition. It is interesting to study how synchronous motor reacts to changes in the load condition.

Hence if Ra the armature resistance and V is the supply voltage, we have established the relation for the armature current as,

In case of synchronous motor also, once rotor starts rotating at synchronous speed, the stationary stator (armature) conductors cut the flux produced by rotor. The only difference is conductors are stationary and flux is rotating. Due to this there is an induced e.m.f. in the stator which according to Lenz’s law opposes the supply voltage. This induced e.m.f. is called back e.m.f. in case of synchronous motor. It is obtained as  Ebph i.e. back e.m.f. per phase. This gets generated as the principle of alternator and hence alternating in nature and its magnitude can be calculated by the equation,

So back e.m.f. in case of synchronous motor depends on the excitation given to the field winding and not on the speed, as speed is always constant.

As stator construction is similar to the armature of a three phase alternator, the impedance of the stator is called synchronous impedance of synchronous motor consisting of  Ra as the stator winding resistance and  Xs as the synchronous reactance. All the values are generally expressed on per phase basis.

So similar to the d.c. motor, we can write voltage equation for a synchronous motor as, The difference is that this equation is vector equation as each quantity is alternating and has different phase. So addition is to be performed vectorially to obtain the result.

where Vph is the supply voltage per phase. The magnitude of  Ebph is adjusted almost equal to Vph, on no load by controlling flux produced by rotor i.e. field winding.

1.1 Ideal Condition on No Load

The ideal condition on no load can be assumed by neglecting various losses in the motor.

Under this condition, the magnetic locking between stator and rotor is in such a way that the magnetic axes of both, coincide with each other as shown in the Fig.1. As this is possible only under no losses condition, is said to be ideal in case of synchronous motor.

As magnitude of Ebph  and Vph  is same and opposes the phasor diagram for this condition can be shown as in the Fig. 2.

In practice this is impossible. Motor has to supply mechanical losses and iron losses alongwith small copper losses. Let us see how it can be explained in case of synchronous motor.

1.2 Synchronous Motor on No Load (With Losses)

We have seen that Ebph  and Vph  are magnitudewise same, which is adjusted by controlling field current, in turn controlling the flux.

Now due to the various losses practically present on no load, the magnetic locking exists between stator and rotor but in such a way that there exists a small angle difference between the axes of two magnetic fields as shown in the Fig.3.

So the rotor axis falls back with respect to stator axis by angle ‘?’ as shown in the Fig.3 This angle decides the amount of current required to produce the torque to supply various losses.

Hence this angle is called load angle, power angle, coupling angle, torque angle or angle of retardation and denoted as ? as mentioned earlier.

The magnetic locking still exists between the two and rotor rotates at synchronous speed alongwith rotating magnetic field maintaining angle difference between the axes of two fields, as shown in the Fig. 3(b). The flux lines between the two get stretched due to such retardation of rotor axis with respect to stator.

Now though ?Ebph ? = ? Vph ?, Ebph  will not be located in exact opposition with Vph , but will get displaced from its initial position by angle’?’ as shown in the Fig. 4(a).

Hence the vector difference between the two, Ebph and Vph is not zero but give rise to a phasor ‘OB’  as shown.

This resultant decides the amount of current Iaph to be drawn to produce the torque which meets the various losses present in the synchronous motor. Under no load condition, ? is very small and hence ERph is also very small.

So current drawn by the motor is also very small on no load which is the case in all the various type of motors.

As the load on the synchronous motor increases, there is no change in its speed. But what gets affected is the load angle ‘?’ i.e. the angle by which rotor axis retards with respect to stator axis.

As ? increases, though Ebph and Vph magnitudes are same, displacement of Ebph  from its ideal position increases.
As synchronous impedance is constant, the magnitude of Iaph drawn by the motor increases as load increases. This current produces the necessary torque which satisfied the increased load demand. The magnetic locking still exists between the rotor and stator.

The phasor diagrams showing ERph increases as load increases are shown in the Fig. 4(b) and (c). So from the above discussion it is clear that on no load, current drawn by the motor is very small. This is because the stator and the rotor magnetic axes are almost matching transformer each other i.e. load angle  ? is very small. As load increases, rotor magnetic axis starts retarding with respect to stator axis i.e. load angle ? increases maintaining the magnetic locking condition. And hence in case of the synchronous motor load affects the angle ? without affecting the speed. As ? increases, the magnitude of ERph increases which shows that motor draws more current from the supply. This satisfies the increased load torque demand.

So torque produced in the synchronous motor depends on the load angle ‘?’ for small values of and to be precise depends on ‘sin?’. The load angle ‘?’ is measured in degrees electrical. As angle ? increases, the magnetic flux lines producing the force of attraction between the two get more and more stretched. This weakens the force maintaining the magnetic locking, though torque produced by the motor increases. As ? reaches upto 90o electrical i.e. half a pole pitch, the stretched flux lines get broken and hence magnetic locking between the stator and rotor no longer exists. The motor comes out of synchronism. So torque produced at ? equal to 90o electrical is the maximum torque, a synchronous motor can produce, maintaining magnetic locking i.e. synchronism. Such s torque is called pull out torque. The relationship between torque produced and load angle is shown in the Fig 5.