For a synchronous motor, the power input to the motor per phase is given by,

The gross mechanical power developed per phase will be equal to the difference between  Pin  per phase and the per phase copper losses of the winding.

For mathematical convenience let Vph = V and Iaph = I,

Now consider the phasor diagram as shown in the Fig. 1.

The equation (1) represents polar equation to a circle. To obtain this circle in a phasor diagram, draw a line OY at an angle ? with respect to OA.

The circle represented by equation (1) has a centre at some point O’ on the line OY. The circle drawn with centre as O’ and radius as O’B represents circle of constant power. This is called Blondel diagram, shown in the Fig. 2.

Thus if excitation is varied while the power is kept constant, then working point B while move along the circle of constant power.

Now OB represents resultant ER   which is Ia  Zs. Thus OB is proportional to current and when referred to OY represents the current in both magnitude and phase.

Substituting various values in equation (2) we get,

Thus the point O’ is independent of power Pm  and is a constant for a give motor operating at a fixed applied voltage V.

The equation shows that as power Pm  must be real, then 4Pm Ra  ? V2 . The maximum possible power per phase is,

This shows that the circle of zero power passes through the points O and A.

The radius for any power Pm  is given by, 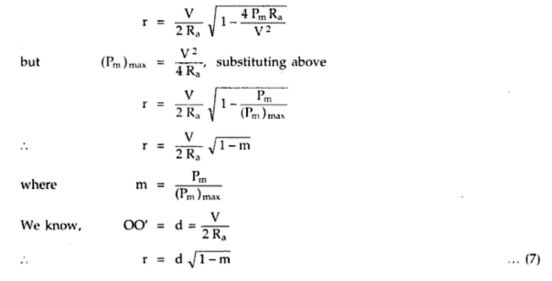 This is generalised expression for the radius for any power.

Related Posts
Interview Question On Relay
Expression For Back E.M.F Or Induced E.M.F. Per Phase In S.M.
Efficiency Of A Transformer
Synchronous Condensers
Categories