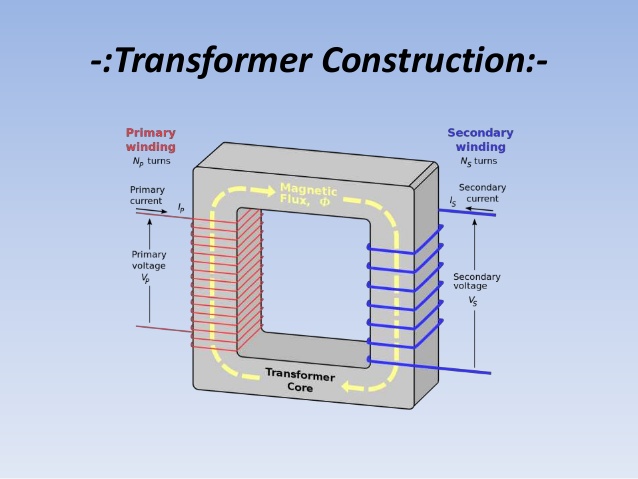 Magnetic core and windings (or coils) are the two basic parts of any transformer. The core is made of silicon or sheet steel with 4 per cent silicon and laminated to reduce eddy current loss. It may be in either square or rectangular shape. It has two parts. The vertical portion on which the coil is wound is called the limb of the core, whereas the top and bottom horizontal portions are called the yoke. Figure 1.2(a) shows the limb and yoke of the core. The permeability of the material used for core must have high value (μr>1,000) to reduce reluctance of the magnetic path. 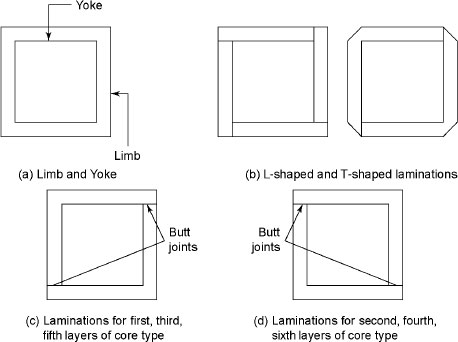 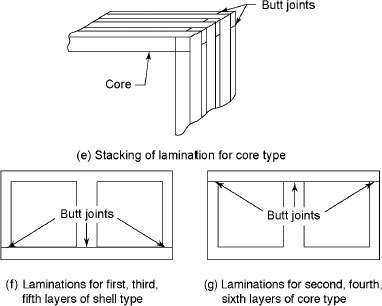 The laminations are insulated from each other by a light coat of core plate varnish or by an oxide layer on the surface. The thickness of lamination is 0.35 mm for a frequency of 50 Hz and 0.5 mm for a frequency of 25 Hz. Figure 1.2(b) shows that the joints of the laminations are staggered to avoid the pressure of narrow gaps right through the cross section of the core. Such staggered joints are said to be imbricated. The cross section of the limb depends on the size of the coil. The thickness of the laminations should be small to reduce the eddy current loss. There is a practical limit of the thickness of lamination, which is 0.3 mm. Any further reducing the value of thickness of laminations leads to make them mechanically weak. The range of acceptable thickness of laminations is 0.33–0.50 mm. The laminations are made by grade steel containing 3–5 per cent of silicon, which increases the resistivity of the core leading to reduction of eddy current core loss. This high-content silicon steel is a soft iron material, which has narrow hysteresis loop and a high permeability. This causes reduction of hysteresis loss and magnetizing current. The steel used for transformer core are either hot rolled or cold rolled. The maximum value of flux density permitted to hot-rolled steel is 1.45 Wb/mm2. The maximum value of flux density permitted to cold-rolled steel is 1.8 Wb/m2, and it is 25–35 per cent more expensive than the hot-rolled steel. The cold-rolled grain-oriented (CRGO) steel sheet with a silicon content of 3 per cent is also used for magnetic circuits of transformer. In a magnetic circuit, we know that flux = mmf/reluctance = primary ampere turns/reluctance, which suggests that the requirement of primary ampere-turns are less for a given value of flux when the reluctance is low. To avoid the joints to come in same line, the laminations of the core are arranged in the form of stack. To achieve this, the laminations shown in Figures 1.2(c) and 1.2(d) are put in alternate layers of Figure 1.2(e) for core-type laminations. Figures 1.2(f) and 1.2(g) shows the laminations for obtaining the shell-type transformers.

The two windings are wound on two limbs, that is, one on the primary and the other on the secondary, as shown in Figure 1.3. Leakage flux increases in this connection. This leakage flux has a negative effect on the transformer performance. To get high mutual inductance, the two coils must be close to each other. To obtain this, the two windings are divided into a number of coils and wound adjacent to each other on the same limb, as shown in Figure 1.4.

Transformers are classified into the following three categories based on the relative arrangement or disposition of the core and the winding: (i) Core type, (ii) shell type and (iii) spiral core type.