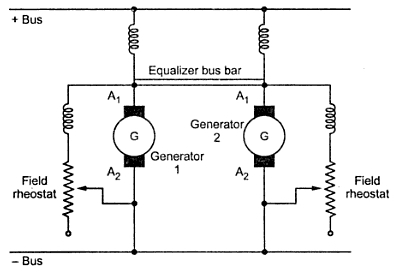 Consider two compound generators 1 and 2 running in parallel as shown in the Fig. 1.

As the voltage characteristics for the usual compound generators are rising, their parallel operation is unstable in the absence of corrective devices.

Let us consider that each generator is taking proper share of load. If for some reason, the generator 1 takes increased load slightly then the current passing through its series field winding increases strengthening its field to increase the generated e.m.f. This causes generator 1 to take still more load. If system load is assumed to be constant then the load on generator 2 will decrease weakening its series field due to less current passing through its field winding which results in further decrease in its load. This effect is cumulative which leads generator 1 to take the entire load and generator 2 will be driven as motor. The circuit breakers of at least one of the two generators will open to stop the parallel operation. The under compound generators show stable operation like shunt generators.