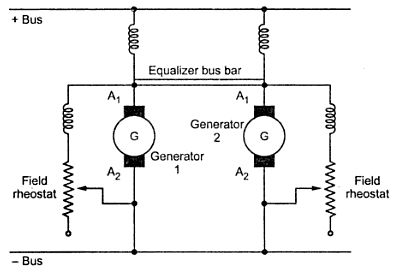 For stable parallel operation, the most suitable type of d.c. generator is shunt generator as it has slightly drooping characteristics. If there is any tendency for a generator to supply more or less than its proper share of load it changes system voltage which certainly opposes this tendency. This restores the original division of load. Thus the shunt generators automatically remains in parallel, once they are paralleled.

Consider voltage-current characteristics of a shunt generator as shown in the Fig. 1(a) and Fig1(b).

Two shunt generators are considered. For common terminal voltage, the two generators are supplying a current of I1 and I2 respectively. It can be seen that generator 2 has more dropping characteristics and supplied less current.

The load will be divided properly within the two generators at all the points provided their voltage characteristics are similar with each generator having same voltage drop from no load to full load.

If the two generators are having different kW ratings then they will share a load in proportion to their ratings with their external characteristics plotted with reference to percentage of full load current as shown in the Fig. 2.

If the two generators having unequal no-load voltages are sharing a load then its analysis is as given below.

The bus bar voltage can be kept constant and the load can be transferred from generator 1 to 2 by increasing either ?2 or N2 or by reducing N1 and ?1 change in N1 and N2 can be achieved by changing the speeds of prime movers while by changing the shunt field rheostats the fluxes ?1 and ?2 can be varied.

In summary it should be kept in mind two shunt generators in parallel having no load voltages equal will share the load in such a ratio that the load current of each machine produces the same drop in each generator. If the generators are having unequal no-load voltages and operated in parallel then the load currents should produce sufficient voltage drops in each generator so as to keep the terminal voltage same. The generator having lower voltage drop takes more share of change in load. If the generators are working in parallel and having different power ratings but same voltage regulation will divide the load in proportion to their power ratings.