Effect Of Change In Rotor Resistance On Torque

Effect Of Change In Rotor Resistance On Torque 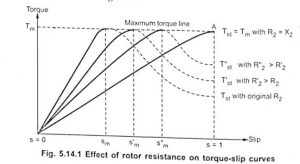 It is shown that in slip ring induction motor, externally resistance can be added in the rotor. Let us see the effect of change in rotor resistance on the torque produced.

Now externally resistance is added in each phase of rotor through slip rings.

Key Point : It can be observed that Tm is independent of R2 hence whatever may be the rotor resistance, maximum torque produced never change but the slip and speed at which it occurs depends on

It is represented by point A in the Fig. 1.

If such high resistance is kept permanently in the circuit, there will be large copper losses (I2 R)  and hence efficiency of the motor will be very poor. Hence such added resistance is cut-off gradually and finally removed from the rotor circuit, in the normal running condition of the motor. So this method is used in practice to achieve higher starting torque hence resistance in rotor is added only at start.

Thus good performance at start and in the running condition is ensured.

Key Point : This is possible only in case of slip type of induction motor as in squirrel cage due to short circuited rotor, extra rotor resistance can not be added.

This is much resistance is required in the rotor externally to obtain  Tst = 0.5 Tm.