Sharing of outer shell electrons to form covalent bonds is shown in Fig. 2.5. 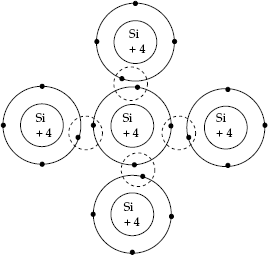 Conductivity of a pure semiconductor at ‘Absolute-Zero temperature’ is zero, since lower Valence Band is filled and there are no electrons in the upper Conduction Band.

At the ambient temperature, some electrons may acquire sufficient energy equal to or greater than the forbidden band-gap energy EGand they will move to energy levels in the upper band. These electrons will be in an incompletely filled band and they can contribute to electrical conduction. While the electrons move to the Conduction Band, they leave Holes in the Valence Band (Holes were formed due to the formation of Hole–electron pairs during the process of breakage of covalent bands in Valence Band). Hole will have positive charge. Formation of Hole–electron pairs is shown in Fig. 2.6. 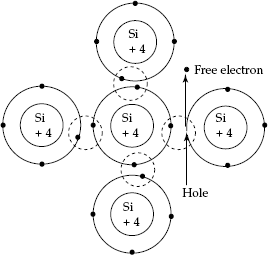 Fig. 2.6 Formation of hole–electron pair Conductivity of ‘intrinsic semiconductor’ is due to the Hole–electron pairs formed during broken covalent bonds or due to supply of energy to free electrons to cross the forbidden band gap to enter the Conduction Band.

Resistivity of semiconductor material can be expressed as

where A is a coefficient that varies slightly with temperature, and ρ is the resistivity of the emiconductor material. It is a function of temperature T and forbidden band-gap energy ΔEG.

Resistance across a standard mass and shape of a material at a given temperature is called the resistivity of the material. The reciprocal of resistivity is conductivity (σ).