Introduction And Working Of Synchronous Motor

Introduction And Working Of Synchronous Motor 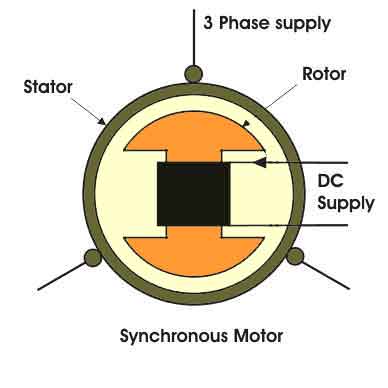 The rotating magnetic field can be defined as the field or flux having
constant amplitude but whose axis rotates in a plane at a certain
speed.e.g. permanent magnet rotating in a space produces a rotating
magnetic field. Similarly if an arrangement is made to rotate the poles,
with constant excitation supplied, the resulting field is rotating
magnetic field. So a field produced in an air gap of a rotating field
type alternator is of rotating type. But this is all about production of
R.M.F. by physically rotating poles or magnet. In practice such a
rotating magnetic field can be produced by exciting a set of stationary
coils or wi9nding with the help of polyphase a.c. supply. The resultant
flux produced in such a case has constant magnitude and its axis rotates
in space without physically rotating the winding. Let us study how it
happens.

3.1 Production of rotating magnetic field
Consider a three phase windings displaced in space by 120o, supplied by a three phase a.c. supply. The three phase currents are also displaced from each other by 120o. the flux produced by each phase current is also sinusoidal in nature and all three fluxes are separated from each other by120o. If the phase sequence of the windings is 1-2-3, then the mathematical equation for the instantaneous values of the fluxes ?1, ?2 and ?3 can be given as,

Hence vector diagram looks like as shown in The Fig. 2(a).
BD is perpendicular drawn from B on ‘ ?T ‘.

So magnitude of the resultant is same as before but is is rotated in space by 60o in clockwise direction, from its previous position.

So magnitude of resultant flux is once again 1.5 ?m but is further rotated by 60o in clockwise direction from its position for ?  = 120o
So for a half cycle of the fluxes, the resultant has rotated through180o. This is applicable for 2 pole winding. From this discussion we can have following conclusions :
a) The resultant of the three alternating fluxes, separated from each other by 120o, has a constant amplitude of 1.5 ?m where ?m is maximum amplitude of an individual flux due to any phase.
b) The resultant always keeps on rotating with a certain speed in space.

The speed of the resultant is in space, for electrical of the fluxes for a 2 pole winding as discussed above.
Key Point : This is nothing but,
omechanical = oelectrical for 2 pole case.
If winding is wound for P poles, then resultant will complete 2/P revolution for 360oelectrical
of the fluxes. The relation is exactly similar to what we have
discussed earlier in case of alternator. So resultant flux bears a fixed
relation between speed of rotation, supply frequency and number of
poles for which winding is wound. The relation is derived while studying
an alternator. So for a standard supply frequency of f Hz of a three
phase a.c. supply and ‘P’ poles of the three windings, the speed of the
rotating magnetic field is Ns r.p.m.
Key Point : So for a rotating magnetic field,
Ns = 120f/P r.p.m.
3.2 Direction of rotating magnetic field

The direction of the rotating magnetic field is always from the axis of
the leading phase of the three phase winding towards the lagging phase
of the winding. In the example above the phase sequence is 1-2-3 i.e.
phase 1 leads 2 by 120o and phase 2 leads 3 by 120o.
So rotating magnetic field rotates from axis of 1 to axis of 2 and then
to axis of e i.e. in the clockwise direction as seen above. This
direction can be reversed by changing any two terminals of three phase
winding while connecting them to the three phase supply. So in practice
for a phase sequence of R-Y-B, the rotating magnetic field is rotating
in clockwise direction, then by changing any two terminals of the
winding it can be changed to anticlockwise, as shown in the Fig. 3(a)
and (b).