Losses In A Transformer

Losses In A Transformer 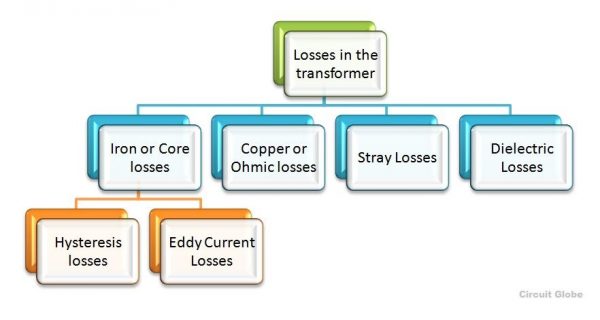 Two types of losses occur in a transformer:

The separation of core losses has already been introduced. The alternating flux gets set up in the core and it undergoes a cycle of magnetization and demagnetization. Therefore, loss of energy occurs in this process due to hysteresis. This loss is called hysteresis loss (Ph), which is expressed by

where Kh is the hysteresis constant depending on the material, Bm is the maximum flux density, f is the frequency and V is the volume of the core.

where Ke is the eddy current constant and t is the thickness of the core.

Since the supply voltage V1 at rated frequency f is always constant, the flux in the core is almost constant. Therefore, flux density in the core remains constant. Hence, hysteresis and eddy current losses are constant at all loads. Thus, the core loss or iron loss is also known as constant loss. The iron loss is denoted by Pi.

The loss of power in the form I2R due to the resistances of the primary and secondary windings is known as copper losses. The copper loss also depends on the magnitude of currents flowing through the windings. The total Cu loss is given by

Copper losses are determined on the basis of R01 or R02 which is determined from short circuit test. Since the standard operating temperature of electrical machine is taken as 75 °C, it is then corrected to 75 °C.

There are two other losses known as stray loss and dielectric loss. Since leakage field is present in a transformer, eddy currents are induced in the conductors, tanks walls and bolts etc. Stray losses occur due to this eddy currents. Dielectric loss occurs in insulating materials coil and solid insulation. These two losses are small and hence neglected.