At N = Ts, the motor stops as it can not produce any torque, as induction motor can not rotate at synchronous motor. 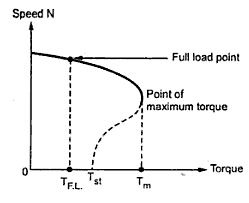