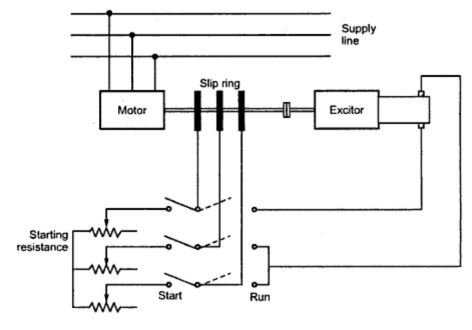 Consider a normal slip ring induction motor having three phase winding on the rotor as shown in the Fig. 1.

Initially it is run as an slip ring induction motor with the help of starting resistances. When the resistance is cut out the motor runs with a slip. Now the connections are changed and the exciter is connected in series with the rotor windings which will remain in the circuit permanently.The motor is connected to the exciter which gives d.c. supply to the motor through slip rings. One phase carries full d.c. current while the other two carries half of the full d.c. current as they are in parallel. Due to this d.c. excitation, permanent poles (N and S) are formed on the rotor.

It may be possible that the a.c. winding is put on the rotor and the d.c. excitation is provided on the stator. This simplifies control gear. It also gives better facilities for insulation which permits higher voltages and lower d.c. excitations.

The d.c. winding must be designed in such a way as to give high m.m.f. with moderate d.c. excitation power. The excitation loss must be distributed evenly over the winding. The mmf distribution should be nearly sinusoidal. It should also provide damping against hunting and it should be satisfactorily started as induction motor.

When direct current excitation is provided a synchronizing torque is quickly set up. The magnitude of this torque is Tm sinθ where θ is the angle between stator and rotor field. In addition to this induction motor torque is also present which is proportional to the slip (dθ/dt), so long as slip is small. There may also be constant load torque if it is started on load and finally it requires torque J(d2θ/d2t) to accelerate the rotor.

As the slip motion is irregular, the motor is subjected to mechanical strains. Also there may be oscillations in current and power factor. Hence it is desired that the motor should synchronize as quickly as possible after switching d.c. excitation. It requires that synchronizing torque should be sufficiently larger than load torque and it should be opposite of load torque. The angle obtained at the instant of switching d.c. excitation also affects pulling into step. Following figures shows oscillograms of rotor current on application of excitation for various values of θ. When the excitation is delayed beyond 60o it is seen that the rotor fails to synchronize as the induction motor torque and the synchronizing torque work in conjuction and the torque will have pulsating value.

Thus the motor can be pulled into the synchronism if excitation is applied at a position that the rotor will occupy when both stator and rotor fields are synchronized.

When the load exceeds the synchronous pull out torque, the machine looses synchronism and runs as an induction motor with fluctuation in torque and slip due to d.c. excitation. With reduction in load torque the motor is automatically resynchronized.