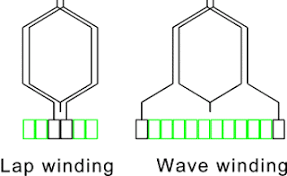 In this case, if connection is started from conductor in slot 1 then connections overlap each other as winding proceeds, till starting point is reached again.

Developed view of part of the armature winding in lap fashion shown in the Fig. 1.

As seen from the Fig. 1, there is overlapping of coils while proceeding.

Note : Due to such connection, the total number of conductors get divided into ‘P’ number of parallel paths, where P = number of pole sin the machine.

In this type of connection, winding always travels ahead avoiding overlapping. It travel like a progressive wave hence called wave winding. To get an idea of wave winding a part of armature winding in wave fashion is shown in the Fig. 2.

Both coils starting from slot 1 and slot 2 are progressing in wave fashion.

The number of parallel paths in which armature conductors are divided due to lap or wave fashion of connection is denoted as A. So A = P for lap connection and A = 2 for wave connection.
1.3 Comparison of Lap and Wave Type Winding