The electronic doorbell in this article is the most simplest among the advance projects in this website. There are many other benefits of the project doorbell. The circuit for the electronic doorbell here will help realise whether the visitor is in front door or in back door. More about there is two LED indicatorwith different colours which provide visual indication to check if anyone had come nor not in your absence. 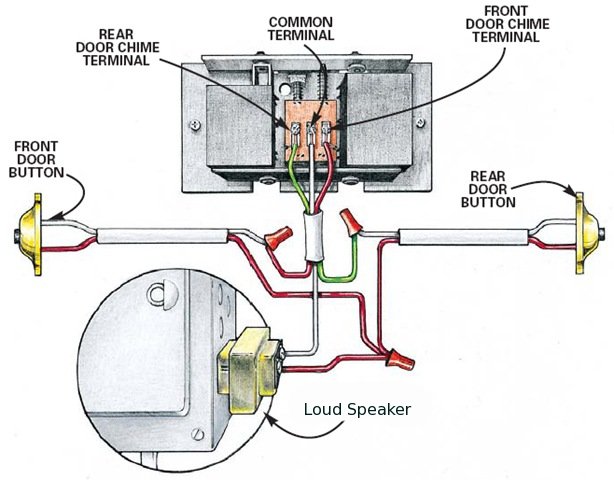 The presented circuit of doorbell in this site is employs a direct couple complementary amplifier and two regenerative latches. The working principal of the circuit doorbell is simple. There are two switches S2 and S3 for FRONT and REAR door respectively. The S1 is open the circuit act as a two-way doorbell. In this case circuit act as a two-way doorbell  with memory, that is the audio alarm indicates whether the visitor is calling from the front door or from back door.

When the S2 is pressed , diode D1 conducts and the complementary amplifier built around transistors T5 and T6 . Now T5 and T6 starts oscillating due to the positive feedback via capacitor C1. In this case low frequency tone is produced which indicates that visitor is a calling form front door. Similarly when switch S3 is pressed then D2 conducts and a high frequency tone is produced to indicate the visitor is calling at the rear door.

In your absence in someone come to your home and call you then it will recorded in its memory. The circuit can provide you an indication on return whether someone had come to your house and called from front door or rear door.To use the memory unit of this circuit you have to switch on the S1 which is the switch for memory. After that whenever someone call you from front door or rear door it will be indicated by the corresponding colour LED to the door. The corresponding LED will be light up and remains in that state until you return to your home. The Circuit can be reset by switching off the memory switch S1.

If both the LEDs are found glowing on returning from a visit then you may be surmise that the visitor(s) called yo at the both the doors. In this circuit, diode D1 and D2 are necessary to isolate the front switch S2 and the rear switch S3. In same way D3 and D4 are used to isolate the audio section of this circuit from regenerative latches. C2 and C3 are used to avoid false triggering of the regenerative latches by the surge produced when S1 is switched ON, as this is generally caused due to high gain of the transistors.