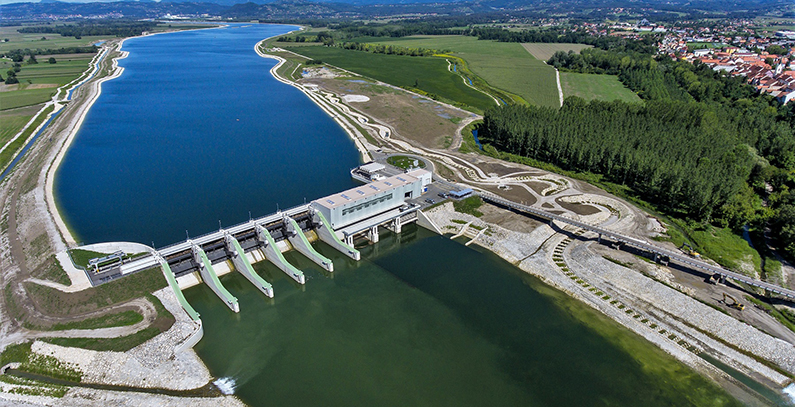 The water turbine captures the energy in the falling water and changes the hydraulic energy (i.e., product of head and flow of water) into mechanical energy at the turbine shaft. The turbine drives the alternator which converts mechanical energy into electrical energy. Hydro-electric power stations are becoming very popular because the reserves of fuels (i.e., coal and oil) are depleting day by day.

They have the added importance for flood control, storage of water for irrigation and water for drinking purposes.

(i) It requires no fuel as water is used for the generation of electrical energy.
(ii) It is quite neat and clean as no smoke or ash is produced.
(iii) It requires very small running charges because water is the source of energy which is available free of cost.
(iv) It is comparatively simple in construction and requires less maintenance.
(v) It does not require a long starting time like a steam power station. In fact, such plants can be put into service instantly.
(vi) It is robust and has a longer life.
(vii) Such plants serve many purposes. In addition to the generation of electrical energy, they also help in irrigation and controlling floods.
(viii) Although such plants require the attention of highly skilled persons at the time of construction, yet for operation, a few experienced persons may do the job well.

(i) It involves high capital cost due to construction of dam.
(ii) There is uncertainty about the availability of huge amount of water due to dependence on weather conditions.
(iii) Skilled and experienced hands are required to build the plant.
(iv) It requires high cost of transmission lines as the plant is located in hilly areas which are quite away from the consumers. 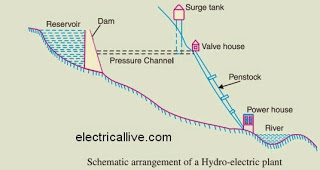 Although a hydro-electric power station simply involves the conversion of hydraulic energy into electrical energy, yet it embraces many arrangements for proper working and efficiency. The schematic arrangement of a modern hydro-electric plant is shown in Fig.

The dam is constructed across a river or lake and water from the catchment area collects at the back of the dam to form a reservoir. A pressure tunnel is taken off from the reservoir and water brought to the valve house at the start of the penstock. The valve house contains main sluice valves and automatic isolating valves. The former controls the water flow to the power house and the latter cuts off supply of water when the penstock bursts. From the valve house, water is taken to water turbine through a huge steel pipe known as penstock. The water turbine converts hydraulic energy into mechanical energy. The turbine drives the alternator which converts mechanical energy into electrical energy.

A surge tank (open from top) is built just before the valve house and protects the penstock from bursting in case the turbine gates suddenly close* due to electrical load being thrown off. When the gates close, there is a sudden stopping of water at the lower end of the penstock and consequently the penstock can burst like a paper log. The surge tank absorbs this pressure swing by increase in its level of water.

The following points should be taken into account while selecting the site for a hydro-electric power station :

(i) Availability of water. Since the primary requirement of a hydro-electric power station is the availability of huge quantity of water, such plants should be built at a place (e.g., river, canal) where adequate water is available at a good head.

(ii) Storage of water. There are wide variations in water supply from a river or canal during the year. This makes it necessary to store water by constructing a dam in order to ensure the generation of power throughout the year. The storage helps in equalising the flow of water so that any excess quantity of water at a certain period of the year can be made available during times of very low flow in the river. This leads to the conclusion that site selected for a hydro-electric plant should provide adequate facilities for erecting a dam and storage of water.

(iii) Cost and type of land.  The land for the construction of the plant should be available at a reasonable price. Further, the bearing capacity of the ground should be adequate to withstand the weight of heavy equipment to be installed.

(iv) Transportation facilities.  The site selected for a hydro-electric plant should be accessible by rail and road so that necessary equipment and machinery could be easily transported. It is clear from the above mentioned factors that ideal choice of site for such a plant is near a river in hilly areas where dam can be conveniently built and large reservoirs can be obtained.