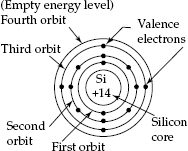 The distribution of electrons in the various orbits for Silicon and Germanium atoms is shown in Table 2.1 and in Figs. 2.1 and 2.3.

Silicon atom representation as a tetravalent material is shown in Fig. 2.2 as a basis to understand the concept of covalent bond formation etc. Silicon semiconductor, as a ‘Tetravalent’ material, has ‘four valence electrons’. The force of attraction between the nucleus (core) and the electron inside the atom is given by

Fig. 2.2 Representation of silicon atom with its valence electrons

.
According to the conversation of energy, energy associated with the electrons W = Kinetic energy + Potential energy:

where the energy W is in joules.
Substituting the value