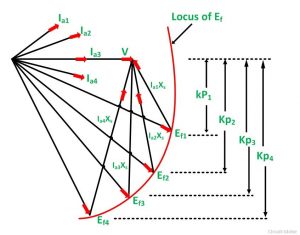 It is seen that, when synchronous motor is on no load, the stator and rotor pole axes almost coincide with each other.

When motor is loaded, the rotor axis falls back with respect to stator. The angle by which rotor retards is called load angle or angle of retardation?.

If the load connected to the motor is suddenly changed by a large amount, then rotor tries to retard to take its new equilibrium position.

But due to inertia of the rotor, it can not achieve its final position instantaneously. While achieving its new position due to inertia it passes beyond its final position corresponding to new load. This will produce more torque than what is demanded. This will try reduce the load angle and rotor swings in other direction. So there is periodic swinging of the rotor on both sides of the new equilibrium position, corresponding to the load. Such a swing is shown in the Fig. 1.

Such oscillations of the rotor about its new equilibrium position, due to sudden application or removal of load is called swinging or hunting in synchronous motor.

If such oscillations continue for longer period, there are large fluctuations in the current. If such variations synchronous with the natural period of oscillation of the rotor, the amplitude of the swing may become so great that motor may come out of synchronism. At this instant mechanical stresses on the rotor are sever and current drawn by the motor is also very large. So motor gets subjected to large mechanical and electrical stresses.

Note : Hence hunting is not desirable phenomenon from motor point of view and must be prevented.

1.1 Use of Damper Winding to Prevent Hunting

It is mentioned earlier that in the slots provided in the pole faces, a short circuited winding is placed. This is called damper winding.