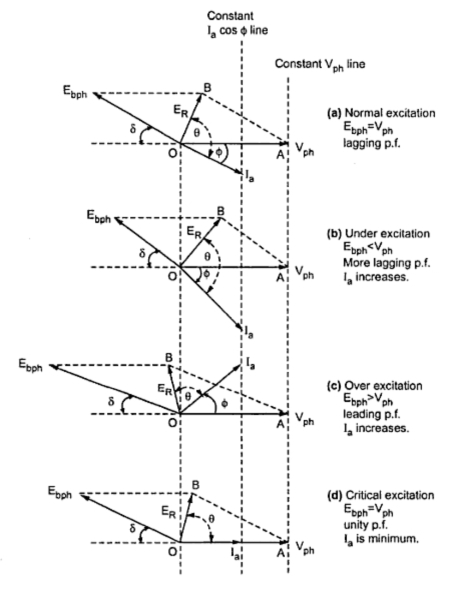 We have seen previously that when load changes, for constant excitation, current drawn by the motor increases. But if excitation i.e. field current is changed keeping load constant, the synchronous motor reacts by by changing its power factor of operation. This is most interesting feature of synchronous motor. Let us see the details of such operation.

Consider a synchronous motor operating at a certain load. The corresponding load angle is ?.

At start, consider normal behaviour of the synchronous motor, where excitation is adjusted to get Eb = V i.e. induced e.m.f. is equal to applied voltage. Such an excitation is called Normal Excitation of the motor. Motor is drawing certain current from the supply and power input to the motor is say  Pin. The power factor of the motor is lagging in nature as shown in the Fig. 1(a).

Now when excitation is changed, changes but there is hardly any change in the losses of the motor. So the power input also remains same for constant load demanding same power output.

Most of the times, the voltage applied to the motor is constant. Hence for constant power input as Vph is constant, ‘Iph cos ?’ remains constant.

Note : So far this entire operation of variable excitation it is necessary to remember that the cosine component of armature current, Ia cos? remains constant.

So motor adjusts its cos ? i.e. p.f. nature and value so that Ia cos ? remains constant when excitation of the motor is changed keeping load constant. This is the reason why synchronous motor reacts by changing its power factor to variable excitation conditions.

When the excitation is adjusted in such a way that the magnitude of induced e.m.f. is less than the applied voltage (Eb < V) the excitation is called Under Excitation. Due to this, ER increases in magnitude. This means for constant Zs, current drawn by the motor increases. But ER phase shifts in such a way that, phasor Ia also shifts (as ER  ^ Ia = ?) to keep Ia cos ? component constant. This is shown in the Fig. 1(b). So in under excited condition, current drawn by the motor increases. The p.f. cos ? decreases and becomes more and more lagging in nature.

The excitation to the field winding for which the induced e.m.f. becomes greater than applied voltage (Eb < V), is called over excitation. Due to increased magnitude of Eb, ER also increases in magnitude. But the phase of  ER also changes. Now = ER  ^ Ia = ?is constant, hence  Ia also changes its phase. So ? changes. The Ia increases to keep Ia cos ? constant as shown in Fig.1(c). The phase of ER changes so that Ia becomes leading with respect to  Vph  in over excited condition. So power factor of the motor becomes leading in nature. So overexcited synchronous motor works on leading power factor. So power factor decreases as over excitation increases but it becomes more and more leading in nature.